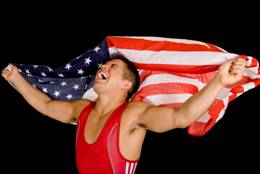 Scottsdale, AZ –Olympic gold medalist and former Maryvale High School student, Henry Cejudo , recently presented members of the Maryvale High School wrestling program with his signature brand of adidas wrestling shoes. Each member of the wrestling team, including the coaching staff, received a pair of shoes from Cejudo, through the Brute and adidas R.E.A.C.H.E.S program (Rewarding Educational Athletic Choices Helping Each Sport). Henry Cejudo, who began his wrestling career at Maryvale high school, is the youngest American wrestler to ever bring home an Olympic gold medal.

During Cejudo’s junior year at Maryvale, Cejudo accepted an invitation to attend the resident freestyle program at the Olympic Training Center in Colorado. Upon finishing his high school education in Colorado Springs, Henry began training full time in preparation for the Olympics. He went on to represent the U.S.A. in Beijing, and achieved his dream of becoming an Olympic gold medalist.

Henry Cejudo had this to say, “My two years at Maryvale high school made a significant impact on my life. I won two state championships while attending Maryvale. Everyone within the Phoenix Union High School District, from the staff to my teammates, encouraged me to follow my dreams. Words cannot express my gratitude. I am very grateful that Brute – adidas and the R.E.A.C.H.E.S program made it possible for me to give something tangible back to the Maryvale wrestling program.”

Cejudo went on to say, “I am very proud to be associated with Brute and adidas and the R.E.A.C.H.E.S. program. They continue to make a positive impact on athletic programs like the one at Maryvale. The organization is a great source of support for various sports across the nation. ”

The Maryvale High School wrestling program played a significant role in Henry Cejudo’s career as a professional athlete. It is where he discovered unlikely solace on a wrestling mat, where dedicated coaches were also his mentors, and where Cejudo’s dreams of becoming an Olympic champion began.

Henry is the son of Mexican immigrants.  The youngest of six children, Henry’s early childhood was spent moving from state to state as a result of his family’s hardships and circumstances.  Henry eventually settled in Phoenix, Arizona. Fortunately, the hardships encountered during his childhood motivated Henry to focus his full attention and efforts on school and athletics.  By the time Henry had reached Maryvale High School in Phoenix, Arizona, he was dominating local competition.  After Henry won his second state wrestling championship in Arizona, he was approached to go to the Olympic Training Center in Colorado Springs, Colorado where he could train with future Olympic hopefuls.

Henry made the decision to relocate to Colorado and follow his dreams of becoming an Olympic Champion. Mirroring his accomplishments in Arizona, he added two state wrestling championships to his record while attending Coronado High in Colorado Springs. Upon graduating, Henry began training full time at the Olympic Training Center to prepare for the 2008 Olympic Games. Henry Cejudo went on to win the gold in Beijing, becoming the youngest American to win a gold medal in wrestling.

About  R.E.A.C.H.E.S.
R.E.A.C.H.E.S. (Rewarding Educational Athletic Choices Helping Each Sport ) is a nonprofit 501(c)(3) organization founded in 2007 in an effort to promote, protect and preserve the integrity of amateur athletics by providing athletic and educational opportunities to all athletes of all ages and abilities.
This unique experience will provide educational, technical, and lifelong lessons for athletes, coaches, parents and fans that seek to capture meaningful, compassionate, harmonious, interesting and active lives.
All profits from R.E.A.C.H.E.S., will be used to support specific needs in each sport to ensure future generations of athletes, fans, parents and coaches will continue to learn from valuable lifelong athletic lessons. For more information on the program please visit www.reachessports.org.